How Parents Find, Manage, and Pay for Childcare When School is Out

In the United States, most states mandate that children attend school between 170 and 180 days a year.1 Traditional school calendars include ten or more weeks of summer break when school is not in session and leave weeks of time in the year where working parents must find other care or activities for their children. Even among the 4 percent of U.S. schools that operate year-round,2 schools tend to sprinkle breaks of three to four weeks throughout the school year, a system that is equally incompatible with the 66 percent of households in America with school-age children where all available parents work.3 As the New America Care Report makes clear – U.S. public policy has made care for children under five into a “private” matter that families are expected to (and struggle to) manage. And summer is the time of year where this private management expands to parents of school age children. Yet little research exists on the particularities of child care during summer.

For a majority of American families, there is not a parent at home to facilitate the idealized American vision4 of unconstrained summer playtime. Instead, each summer (and often during holiday breaks) parents face an enormous and expensive set of logistical tasks to secure reliable care for their children when school isn’t in session. One 2014 study from the Afterschool Alliance reports that 33% of families with school-aged children say at least one child attended a “summer learning program” defined as a “a safe, structured program that provides a variety of activities designed to encourage learning and development” for an average of 5 hours a day, and for an average of 5 weeks – a set up not particularly compatible with full-time working parents and a 10 week or longer summer break.

For many, summer care and summer camp end up being purely about safe care, rather than about enriching and engaging experiences. An impact of this is summer learning loss, where children measurably lose knowledge and learning progress over their summer months, which disproportionately affects the very low-income families who struggle most to find and afford care. So how do parents navigate this annual rite of passage, and what are the costs? And how much of a challenge is it for American parents to manage the yawning gap of time that we’ve built into our school cycle?

To answer these questions, the Better Life Lab conducted a short national online survey of 1,335 U.S.-based5 online parents of children ages 4 to 14 and asked them several key questions about what their children did over the past summer, how much it cost them, and how easy or hard it was to find and afford summer care.

Working families cobble together a patchwork of care and camps to make their summers work.

Families use parent care and family vacations, as well as camps, care from relatives, babysitters, summer jobs, and having their children stay home alone to manage their children’s time over the summer. Many families (44 percent) told us that they use family vacation or care from a parent as a part of their summer care plan. Another quarter (26 percent) of families send their children to a day camp for at least part of the summer, and just under 10 percent send their kids to sleep-away camp. 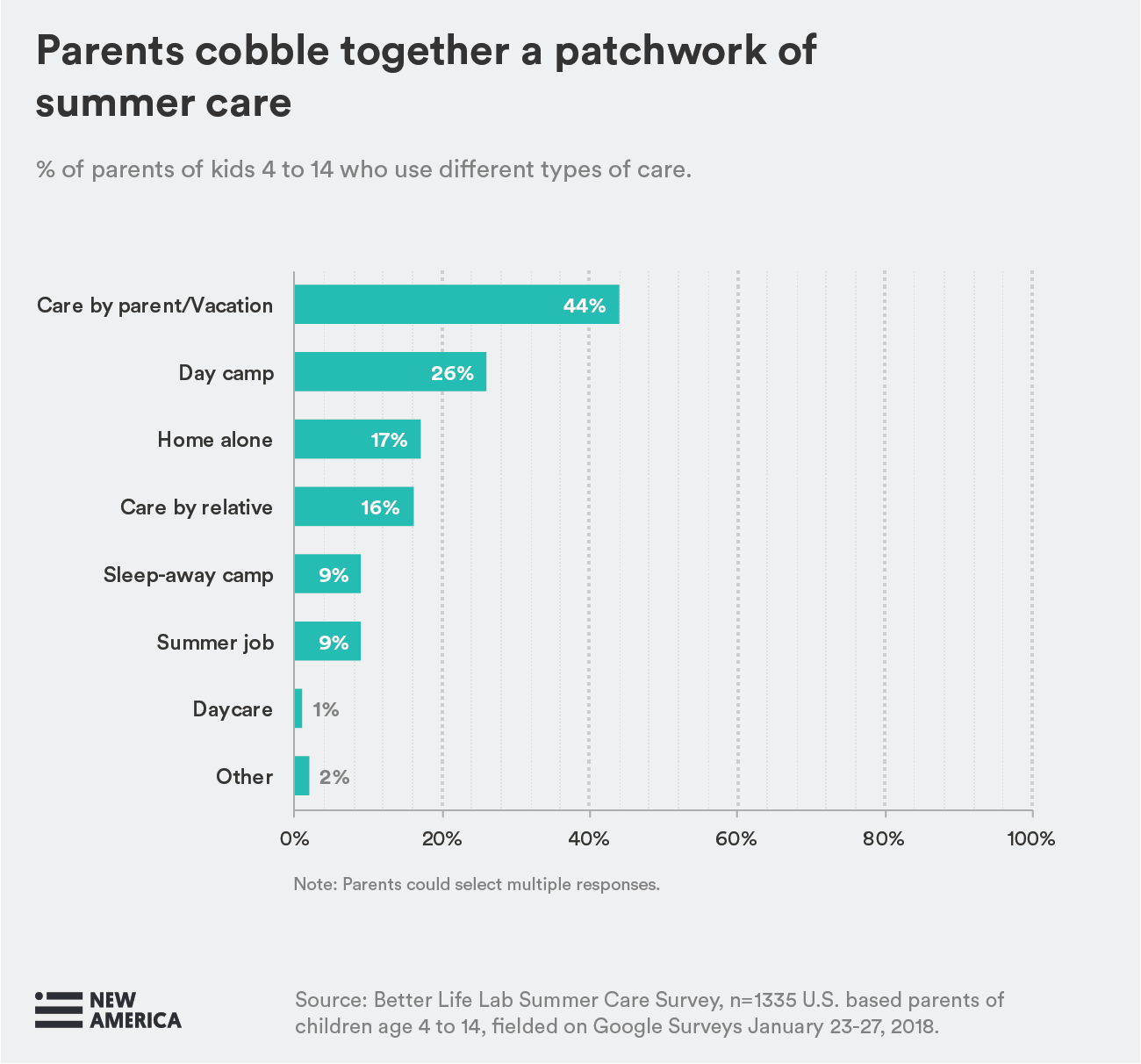 Many families also depend on the help of relatives to make their summer work; 16 percent of families rely on family members (who were not the child’s parent) to help care for their child or children for at least part of the summer. Other families ask their kids (where possible) to get a summer job (9 percent) or have them stay home alone (17 percent). Others remain in daycare, or families engage sitters to ensure that their children are fully cared for over the summer months.

Nearly half (46 percent) of American parents say it is somewhat or very hard to afford summer care or camp for their children. 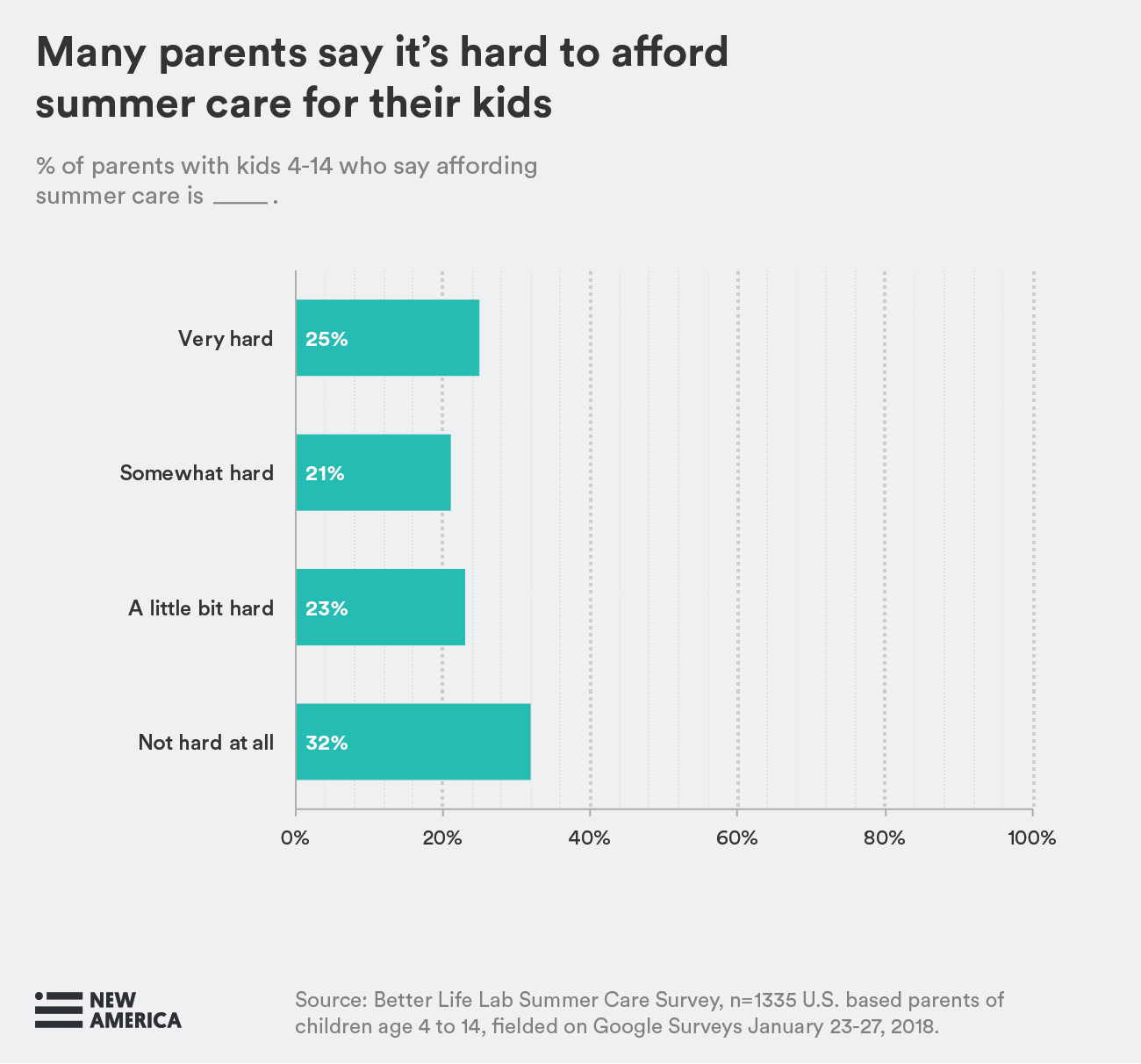 Families with more children sit on either end of the affordability spectrum. Families with four or more children are both more likely than those with two or three kids to say it is easy to afford summer care for their children (most likely because a parent is at home providing care) and more likely than smaller families to say that care is very hard for them to afford, with 35 percent of these larger families saying it is very hard to afford camp or care compared with just 23 percent of parents with one child who reported similar challenges.

Female parents in our survey were also more likely than male parents to say that summer care was very hard to afford, with 62 percent of mothers reporting struggles with affordability, compared with 38 percent of fathers. This may be due to the greater likelihood of women heading single parent households with only one wage earner, or because women in general are more likely to manage the logistics of acquiring care for their children.

Not only do parents find summer care and camps hard to afford, but putting together care for ten or more weeks ends up being costly for many families. Fully 20 percent of American parents of 4 to 14 year olds report paying more than $3,000 to cover the cost of care for their children over the summer, with 12 percent reporting paying more than $4,000. And that doesn’t include purchasing clothing or special equipment (e.g. pads for football or a sleeping bag) that might be needed for certain camps. For a typical ten-week summer, that’s $60 a day or more in care costs. An employee working full time and earning the federal minimum wage of $7.25 an hour takes home about $54 a day. The average household income for families with children was $68,000 in 2016,6 and nearly one in five children live in families with incomes below the federal poverty level.7 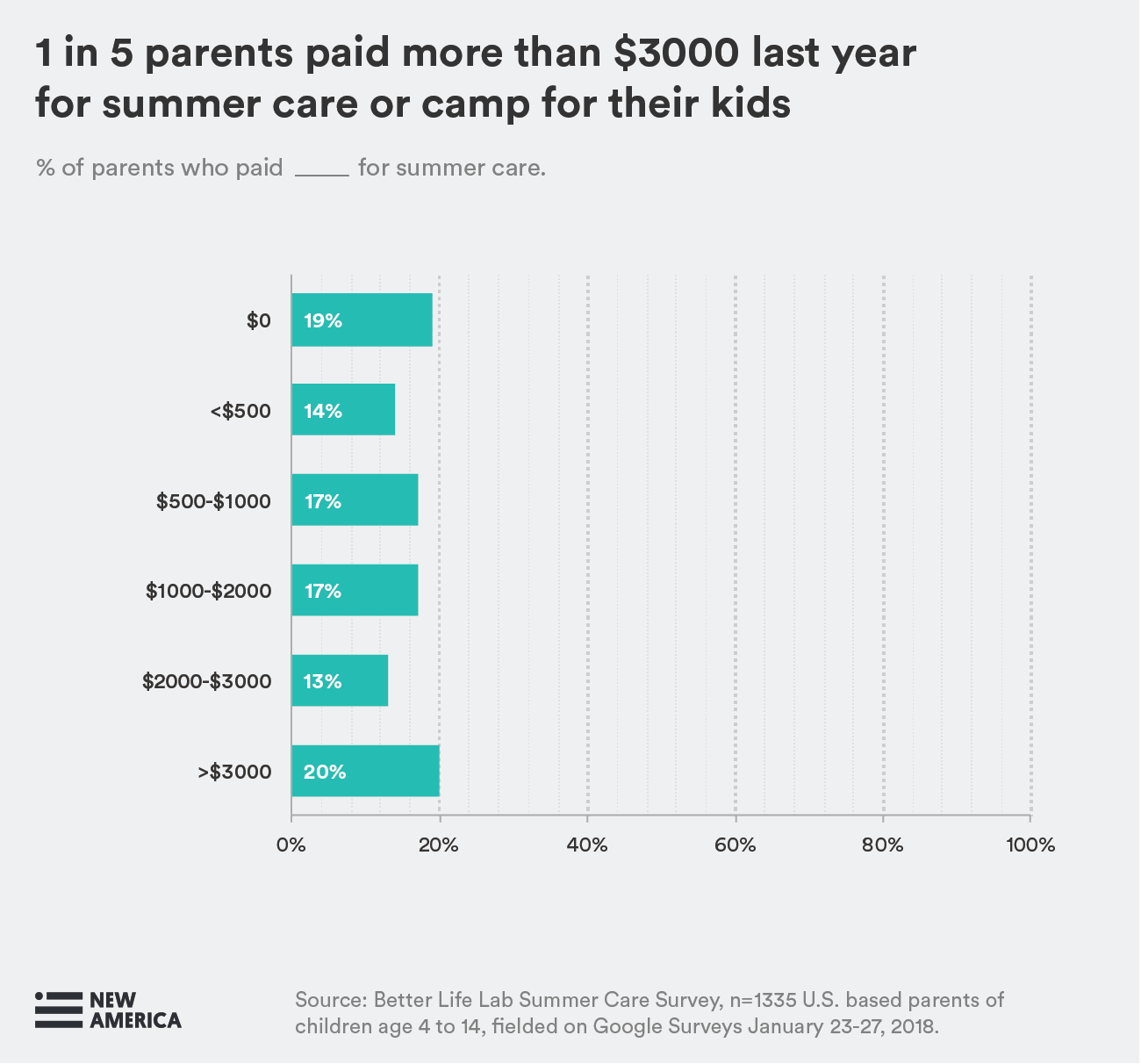 Not only is care hard to afford, it’s also simply hard to find for many families.

As the New America Care Report makes clear, the U.S. child care system for children 0-5 isn’t working for anyone. Parents struggle to find quality, affordable, accessible care, and low-wage care providers struggle to make a living wage and can’t afford care for their own families. The impact of these cultural and policy positions places an inordinate time and cost burden on families who are already managing the most time-consuming caregiving time in a child’s life, not to mention the cost to low-income care providers who make poverty wages. For children five and older, public education largely takes on the role of caring for and educating children. However, summers and other school breaks leave gaps in child learning and care, and this survey briefly sketches out challenging – and largely unmapped – parent experiences of seeking summer care for school-age children and the high costs they bear to ensure that their children are at the very least, safe, and at best engaged and enriched. These costs are disproportionately borne by lower-wage and larger families who must be extra diligent, forward-looking, and resourceful to find and access what subsidized camps and care exists, if any, in their community. In the absence of readily available, affordable, and dependable care options, summer will symbolize growing U.S. inequality, rather than the freedom and opportunity for growth many families hope it will be.

This study was conducted in English on the Google Survey platform on January 23-27, 2018. The survey interviewed 1,335 parents of children age 4 to 14 with a U.S. IP address. Google Surveys shows questions across a network of premium online news, reference, and entertainment sites where surveys are embedded directly in the content. Users answer questions in exchange for access to the web content, an alternative to subscribing or upgrading. The user's gender, age, and geographic location are inferred based on anonymous browsing history and IP address. Using this data, Google Surveys automatically builds a representative sample of thousands of respondents. For more detailed information, see the Google Surveys Whitepaper.

The data for this study was weighted, using the inferred gender, age, and geographic location variables to be representative of the population of the United States based on Census data.

In addition to the error associated with inferred demographic data, and non-probability sampling, there were additional limitations placed on the design and length of questions on the Google Survey platform. Questions were limited to 175 characters, response options had to be 44 characters or less. Reponses were limited to six options total, and required either a “Specify” open-ended final option or a “Does Not Apply” option as the final option for each closed-ended question. Additionally, by surveying solely in English, we miss respondents who would prefer or need to to take the survey in another language.

This research was made possible by Google Surveys, which donated the use of its online survey platform. The questions and findings are solely those of the researchers and not influenced by any donation. For more information on the methodology, see the Google Surveys Whitepaper.

Did Moms Exist Before Social Media?

After men in Spain got paternity leave, they wanted fewer kids